In the autumn of 1956, Minister of Ministry of Education, Mr. Ci-yun Jhang who viewed construction of education as the nation’s fundamental and crucial plan and the source of ethnical vigour decided to choose Botanical Garden located on Nanhai Road, Taipei, as the venue for establishing “National Center of Arts,” having a high-level sense of mission and great determination. He made it almost from nothing under the circumstances of seriously lacking labour and finance. Mr. Ji-ping Wu, started working as its first director general in February, 1957. National Center of Arts was officially established on March 29, at the same year. Our Center’s Organic Law was promulgated by the President on October 23, 1985 for its implementation: it also changed to a new name: “National Taiwan Arts Education Center,” which takes charge of tasks such as research, promotion and guidance of art education in Taiwan. 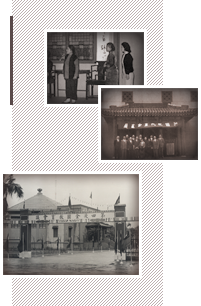